Seq’s namesake type is indeed the sequence type: seq. A seq object represents a DNA sequence of any length and—on top of general-purpose string functionality—provides methods for performing common sequence operations such as splitting into subsequences, reverse complementation and \(k\)-mer extraction. Alongside the seq type are \(k\)-mer types, where e.g. Kmer[1] represents a 1-mer, Kmer[2] a 2-mer and so on, up to Kmer[1024].

Sequences can be seamlessly converted between these various types:

In practice, sequences would be read from e.g. a FASTQ file:

If you only care about the sequences, you can also do this:

To read protein sequences, you can use pFASTA, which has the same interface as FASTA (but does not support fai):

A novel aspect of Seq’s match statement is that it also works on sequences, and allows for concise recursive representations of several sequence operations such as subsequence search, reverse complementation tests and base counting, as shown in this example:

Sequence patterns consist of literal ACGT characters, single-base wildcards (_) or “zero or more” wildcards (...) that match zero or more of any base.

Pipelining is a natural model for thinking about processing genomic data, as sequences are typically processed in stages (e.g. read from input file, split into \(k\)-mers, query \(k\)-mers in index, perform full dynamic programming alignment, output results to file), and are almost always independent of one another as far as this processing is concerned. Because of this, Seq supports a pipe operator: |>, similar to F#’s pipe and R’s magrittr (%>%).

Pipeline stages in Seq can be regular functions or generators. In the case of standard functions, the function is simply applied to the input data and the result is carried to the remainder of the pipeline, akin to F#’s functional piping. If, on the other hand, a stage is a generator, the values yielded by the generator are passed lazily to the remainder of the pipeline, which in many ways mirrors how piping is implemented in Bash. Note that Seq ensures that generator pipelines do not collect any data unless explicitly requested, thus allowing the processing of terabytes of data in a streaming fashion with no memory and minimal CPU overhead.

Here’s an example of pipeline usage, which shows the same two loops from above, but as pipelines:

First, note that split is a Seq standard library function that takes three arguments: the sequence to split, the subsequence length and the stride; split(..., 3, 2) is a partial call of split that produces a new single-argument function f(x) which produces split(x, 3, 2). The undefined argument(s) in a partial call can be implicit, as in the second example: kmers (also a standard library function) is a generic function parameterized by the target \(k\)-mer type and takes as arguments the sequence to \(k\)-merize and the stride; since just one of the two arguments is provided, the first is implicitly replaced by ... to produce a partial call (i.e. the expression is equivalent to kmers[Kmer[5]](..., 1)). Both split and kmers are themselves generators that yield subsequences and \(k\)-mers respectively, which are passed sequentially to the last stage of the enclosing pipeline in the two examples.

The Seq compiler may perform optimizations that change the order of elements passed through a pipeline. Therefore, it is best to not rely on order when using pipelines. If order needs to be maintained, consider using a regular loop or passing an index alongside each element sent through the pipeline.

Here is the list of options supported by the align() method; all are optional (default is global alignment):

Note that all costs/scores are positive by convention.

Large genomic indices—ranging from several to tens or even hundreds of gigabytes—used in many applications result in extremely poor cache performance and, ultimately, a substantial fraction of stalled memory-bound cycles. For this reason, Seq performs pipeline optimizations to enable data prefetching and to hide memory latencies. You, the user, must provide just:

In particular, a typical prefetch-friendly index class would look like this:

Now, if we were to process data in a pipeline as such:

The Seq compiler will perform pipeline transformations to overlap cache misses in MyIndex with other useful work, increasing overall throughput. In our benchmarks, we often find these transformations to improve performance by 50% to 2×. However, the improvement is dataset- and application-dependent (and can potentially even decrease performance, although we rarely observed this), so users are encouraged to experiment with it for their own use case.

As a concrete example, consider Seq’s built-in FM-index type, FMIndex, and a toy application that counts occurences of 20-mers from an input FASTQ. FMIndex provides end-to-end search methods like locate() and count(), but we can take advantage of Seq’s prefetch optimization by working with FM-index intervals:

That single @prefetch line can have a significant impact, especially for larger k. Here is a graph of the performance of this exact snippet for various k using hg19 as the reference: 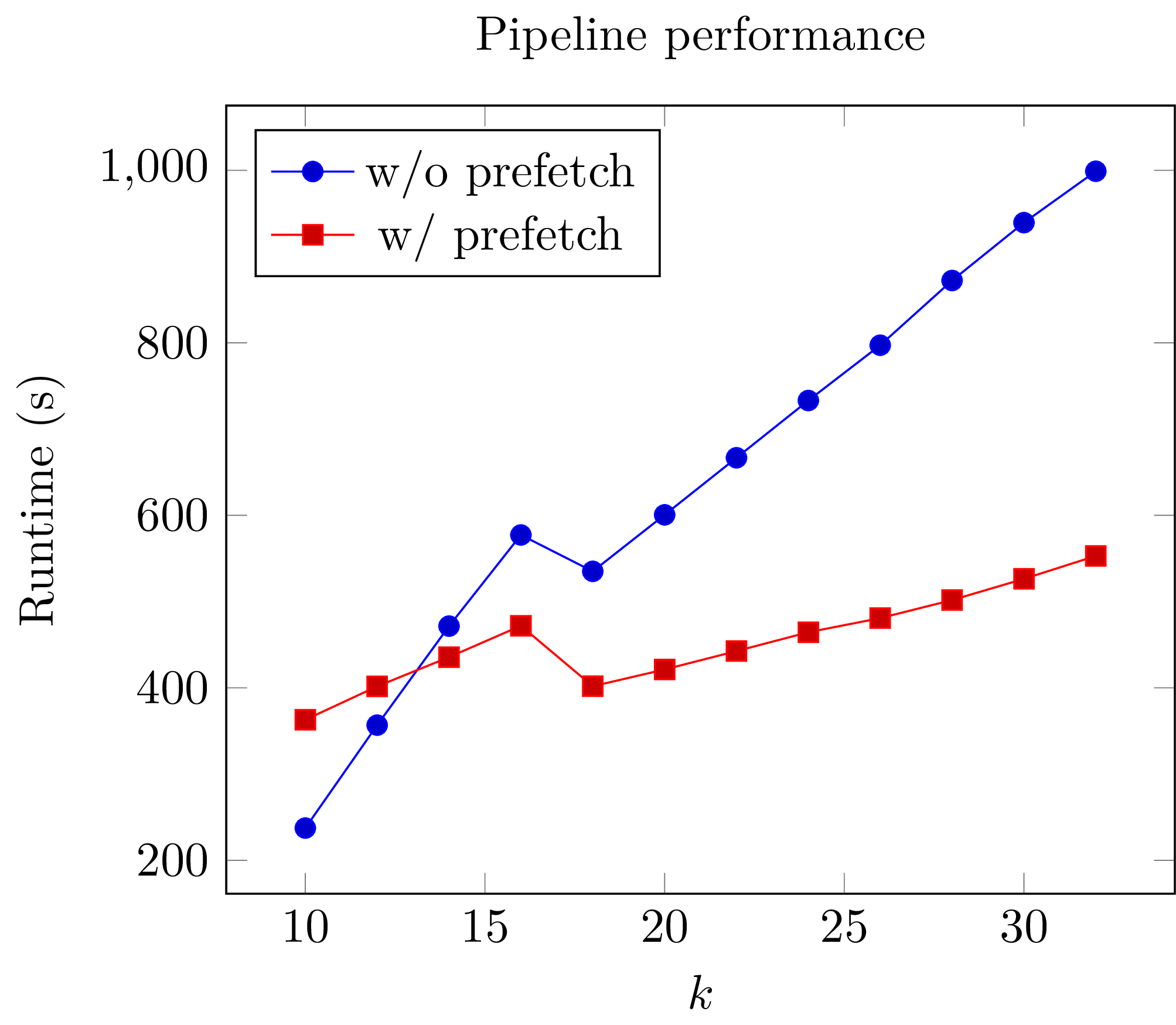 CPython and many other implementations alike cannot take advantage of parallelism due to the infamous global interpreter lock, a mutex that protects accesses to Python objects, preventing multiple threads from executing Python bytecode at once. Unlike CPython, Seq has no such restriction and supports full multithreading. To this end, Seq supports a parallel pipe operator ||>, which is semantically similar to the standard pipe operator except that it allows the elements sent through it to be processed in parallel by the remainder of the pipeline. Hence, turning a serial program into a parallel one often requires the addition of just a single character in Seq. Further, a single pipeline can contain multiple parallel pipes, resulting in nested parallelism. As an example, here are the same two pipelines as above, but parallelized:

Internally, the Seq compiler uses Tapir with an OpenMP task backend to generate code for parallel pipelines. Logically, parallel pipe operators are similar to parallel-for loops: the portion of the pipeline after the parallel pipe is outlined into a new function that is called by the OpenMP runtime task spawning routines (as in #pragma omp task in C++), and a synchronization point (#pragma omp taskwait) is added after the outlined segment. Lastly, the entire program is implicitly placed in an OpenMP parallel region (#pragma omp parallel) that is guarded by a “single” directive (#pragma omp single) so that the serial portions are still executed by one thread (this is required by OpenMP as tasks must be bound to an enclosing parallel region).

Seq provides an extend keyword that allows programmers to add and modify methods of various types at compile time, including built-in types like int or str. This actually allows much of the functionality of built-in types to be implemented in Seq as type extensions in the standard library. Here is an example where the int type is extended to include a to method that generates integers in a specified range, as well as to override the __mul__ magic method to “intercept” integer multiplications:

Note that all type extensions are performed strictly at compile time and incur no runtime overhead.

Seq provides arbitrary-width signed and unsigned integers up to Int[512] and UInt[512], respectively (note that int is an Int[64]). Typedefs for common bit widths are provided in the standard library, such as i8, i16, u32, u64 etc.

The ptr[T] type in Seq also corresponds to a raw C pointer (e.g. ptr[byte] is equivalent to char* in C). The array[T] type represents a fixed-length array (essentially a pointer with a length).

Seq provides a built-in module for interfacing with BWA. To use this module, simply build a shared BWA library and set BWA_LIB accordingly:

Now BWA can be used in Seq as such:

Consult the BWA documentation for a detailed description of each of these.